My life was spent either sleeping or going on an adventure.

Anna Mirabai Lytton was born at home in East Hampton on April 30, 1999 on the full moon of the Buddha, the same day of the lunar calendar as her brother two years earlier. Besides her parents her early years were supported by wonderful caretakers, particularly Kelsang Wangmu, a young Tibetan woman newly arrived from Nepal, and three Scottish girls on successive summers, Alice Chapman, Rebecca Watt and Lynn Fraser, then New Zealand Maori, Tamara Asher. Sara Karl also became part of the family for several years after being recruited by Anna at a chanting concert in New York.

Anna attended the early childhood program at then Hampton Day School, where she met two of her lifelong best friends, Julia Friedrich and Josie Battle. At the age of five, when her aunt asked her how she saw her life, she replied, “I’m either asleep or on an adventure.” When she was five the family lived for three months in India and Anna got to ride on elephants and to meet wonderful spiritual figures. She came back to kindergarten at Springs School where she continued with an extraordinary cadre of teachers through eighth grade, and would have graduated in June 2013. Anna was excited to attend high school at the Ross School where her brother, James Dhruva was studying. She played on the soccer and lacrosse teams at Springs. In fourth grade she was on a web program called Smart Girls at the Party with Amy Poehler (see Youtube video below), demonstrating yoga poses she had learned with her mom, yoga teacher Kate Rabinowitz.

Her adventures continued on travels with her family, especially with her grandparents, Alan and Andrea Rabinowitz to England and Scotland, New Mexico, on a dinosaur dig to Colorado, following the Lewis and Clark trail to Washington State, camping in Glacier Park, trips to the islands in the Northwest and Canada. In 2012, a family Eurail trip to Italy included Milan, Venice, Assisi and Florence. In summers there were trips to Martha’s Vineyard and time at Indian Brook Farm and Wilderness camp in Vermont. She was looking forward to another summer at her camp .

Anna was an avid reader and had begun to explore classic literature on her own. She was a prolific writer and poet, and loved to take photographs and listen to music. She loved to cook with her mother and brother, and she and her mom planned to make healthy snacks to sell at the local farmers market. She had a great interest in health and well-being, loved flowers and gardening with her dad, and going to pick at Quail Hill Farm.

At the end of a camp canoe trip she wrote a poem that closed with:

A sweet silence settles
On our group as we row.
Dawn turns to dusk and soon
The sky is darkening
And the once calm water
Churns in the wind.
The campsite is near but rocks jut out at us
Preventing our docking.
It gets shallower and we try to walk
But the water pulls at our clothes and boats
It urges us to let go.
We reach the shore
The dry land welcomes us.
I have soaked up the water like a sponge
And now it is draining out
Along with my remaining strength.
We have reached our resting place
And completed our work.

To honor Anna’s passion for the arts, the family established the Anna Mirabai Lytton Foundation for Arts and Wellness, dedicated to enriching arts and wellness for the young, including at Springs School. Contributions may be addressed to the

A mural is created by Anna’s friends at the Springs School. It is a tree of life, with butterflies and scenes of Anna’s passions…travel, friends, music, sushi, and adventures under the moon. It is now installed in the school Gym for all to see. Her locker was decorated by her friends too and her classmates gathered to express their feelings with messages through art. 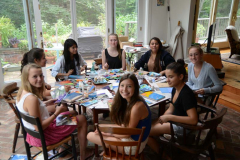 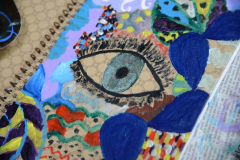 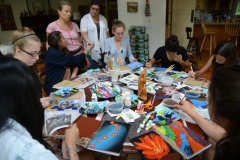 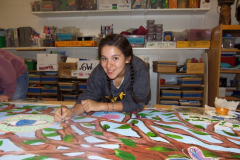 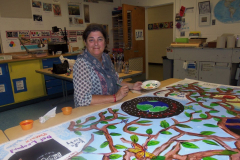 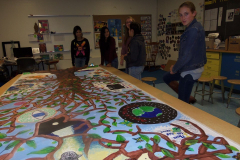 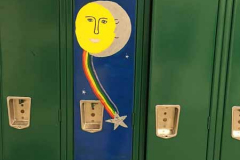 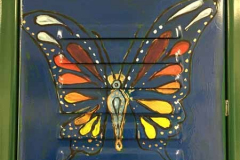